Labyrinth = The place of the double axe = The Cave of Arkalochori ?

The word Labyrinth literally means “The Place of the Double Axe”. Labrys is the feminine Pre-Hellenic Indo-European Minoan word for “Double Axe”, and was the Lydian word for axe according to Plutarch.

The Pre-Hellenic Indo-European ending -inthos, is found both sides of the Aegean Sea, and means “Place of”. Thus Labyrinth came to mean the “House of the Double Axe” as a sign of authority, similar perhaps to the Carian deity Labraundos, later identified as Zeus with the Double-Axe. The Labyrinth was originally known in Egypt, on Crete and at Miletos in Asia Minor, while there are also references to caves with built labyrinths within them.

Labyrinth has come to mean a maze, after the mythological one constructed by Daidalos where Theseus with the aid of Ariadne killed the Minotaur. That Labyrinth may well have been the Palace of Knossos itself, in the Mycenaean period, as indeed suggested by Arthur Evans following the pioneering excavations of Minos Kalokairinos, due to the frequent Double Axe Mason’s Marks engraved on its walls.

At Mycenaean Knossos, Potnia, the “Lady of the Labyrinth”, found in Linear B as da-pu2-ri-to-jo po-ti-ni-ja (KN Gg 702 line 2) was offered an amphora of honey (me-ri), a similar offering is attested to da-da-re-jo-de (KN Fp1+31 line 3) meaning to the Daidaleion, “Sanctuary of Daidalos”, who received quantities of oil.

Labyrinth is a word connected with Minoan Crete, usually found in the masculine, but in the Mesara in South Crete near Phaistos interestingly found in the feminine just like Korinthos and Zominthos.

The Labyrinthos as the “Place of the Double Axe”, may indeed be located neither at Knossos in the North, nor near Phaistos in the South, but perhaps rather at the Cave of Arkalochori on the hill of Profitis Ilias which dominates the rich agricultural plain of Pediadha of Central Crete, between the Peak Sanctuaries of Iouktas and Kophinas and between the Holy Mountains of Dikte and Ida.

Mount Iouktas is the Head of Minoan Crete and it is here tentatively proposed that Arkalochori Cave is the Heart and indeed the Labyrinth of Minoan Crete, since hundred of votive double axes were found there. 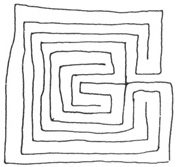 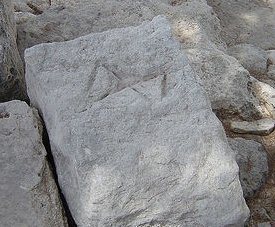 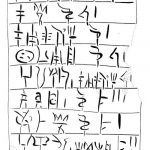