Minoan Crete was the first area in both the Aegean and Europe which both developed and used a system of writing, a fact which demonstrates proof of a high level of civilization. The earliest “Cretan Hieroglyphic” signs appear at the end of the 3rd Millennium and come from the cemetery of Fourni at Archanes. Later on, approximately at the start of the Second Millennium, the script develops and becomes more systematic in order to serve the needs of the complicated bureaucratic system of the First Minoan Palaces.

In the beginning of the New Palace period there is also a second system of syllabic writing, Linear A, which is also used along with the “Cretan Hieroglyphic” Script. Both scripts were invented by the Minoans in order to record their language, which remains unknown, since the scripts have not yet been deciphered. Documents in both the “Cretan Hieroglyphic” and Linear A Script were found in the same archive, a fact which demonstrates that the two scripts co-existed during the Old Palace Period, in the New Palace Period however Linear A dominates. Most of the texts in Linear A, mainly on clay tablets from Central and Eastern Crete, date from the LMIB period. 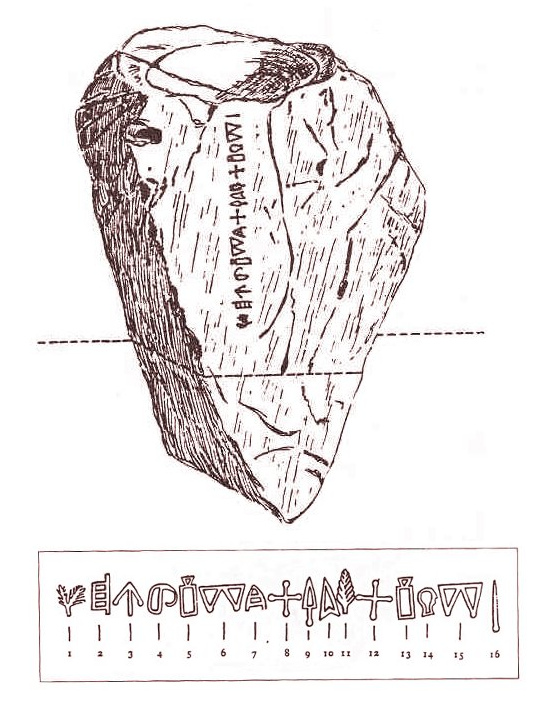 There are ten Minoan Linear A inscriptions from Malia, six on clay tablets, two on clay roundels, one on a clay vase and one on a stone block at the north-western entrance to the Palace. These inscriptions date from the Middle Minoan III period to the Late Minoan I period c.1600 B.C., i.e., the Second Palace Period of Malia. The archival documents are found on tablets with more than one inscribed face. They consist of syllabograms and ideograms for products recorded with or without numerals. Two tablets for example, MA 4 and 6, appear to record hundreds of animal skins. The inscription on a stone block is a rare monumental inscription comparable to similar inscriptions from Knossos. The Linear A script at Minoan Malia was used for administrative/commercial and or personal/religious use.

There are one hundred and six Minoan “Cretan Hieroglyphic” inscriptions from Malia, 52 on archival documents, 14 on sealings, 25 on seals and 15 on other documents, such as on “Chamaizi Vases”, pithoi and other vessels. There are also 15 signs of the “Cretan Hieroglypic” Script engraved on the inscribed Malia Stone Block. These inscriptions date from the Middle Minoan II period to the Middle Minoan III period c.17th Century B.C., i.e., the First Palace Period of Malia. The administrative archival documents are found on cones, medallions, bars with one, two or four faces, nodules and tablets. The inscriptions consist of syllabograms and ideograms with or without numerals. The “Cretan Hieroglyphic” script at Minoan Malia was used for administrative/commercial and or personal/religious use.

In 1937, Chapouthier discovered the impressive Malia Stone Block on a ‘kernos’ stone libation table with an inscription of 15 “Cretan Hieroglyphic” signs. This inscription has interesting epigraphic comparisons with both the Phaistos Disk and other “Cretan Hieroglyphic” inscriptions of Minoan Crete, such as the epigraphically related Arkalochori Metal Axe. The inscription is probably to be read from the bottom of the Stone Block upwards, following the direction of the face in profile facing right etc. The object in question is a stone libation table with a cavity on the top to receive offerings and it is logical to think that the message inscribed is also religious from the First Palace Period of Malia. 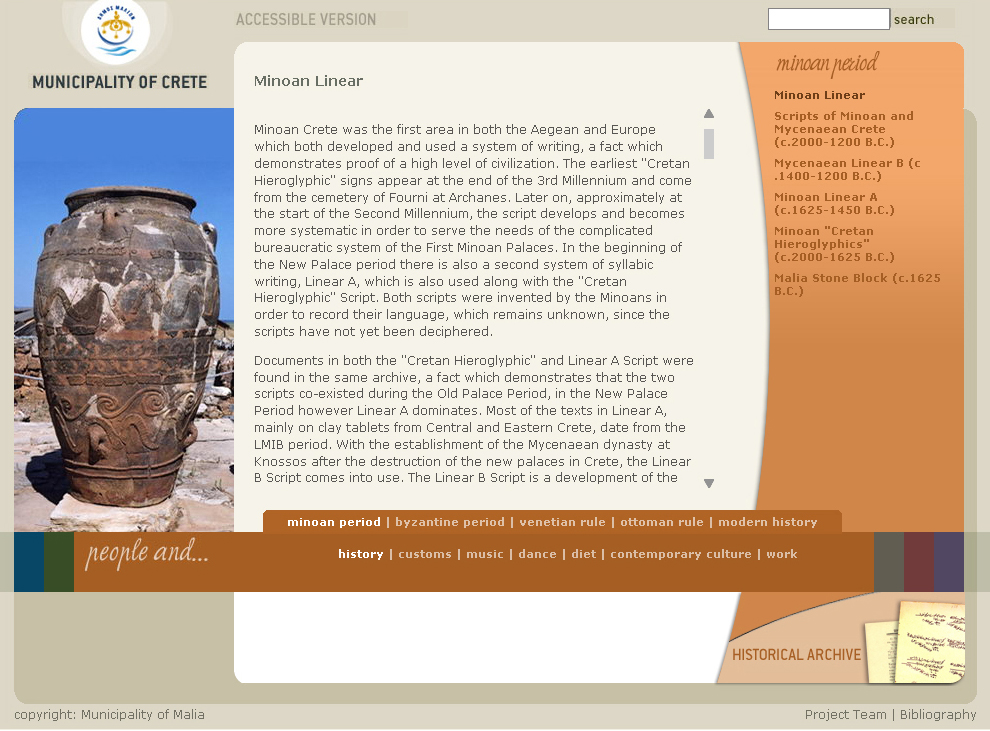 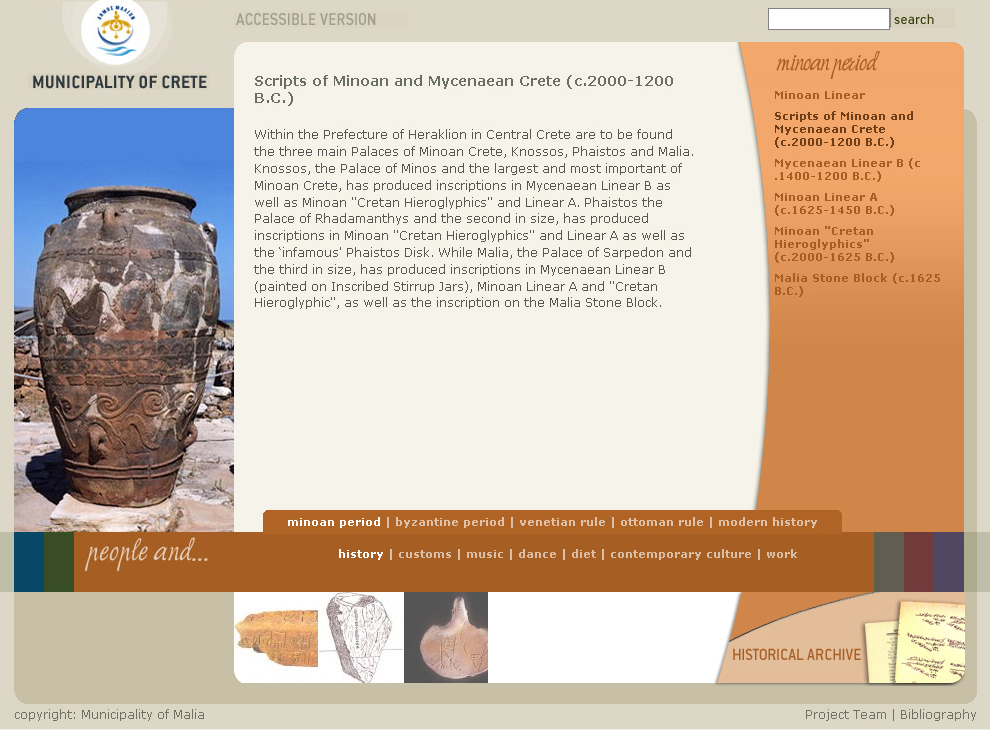 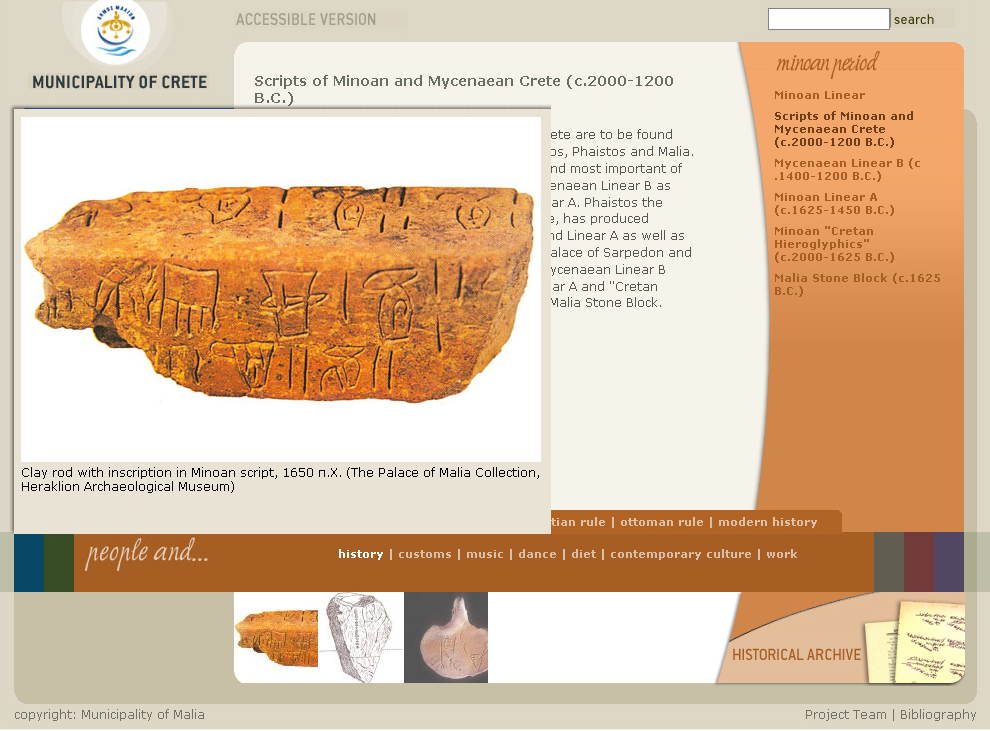 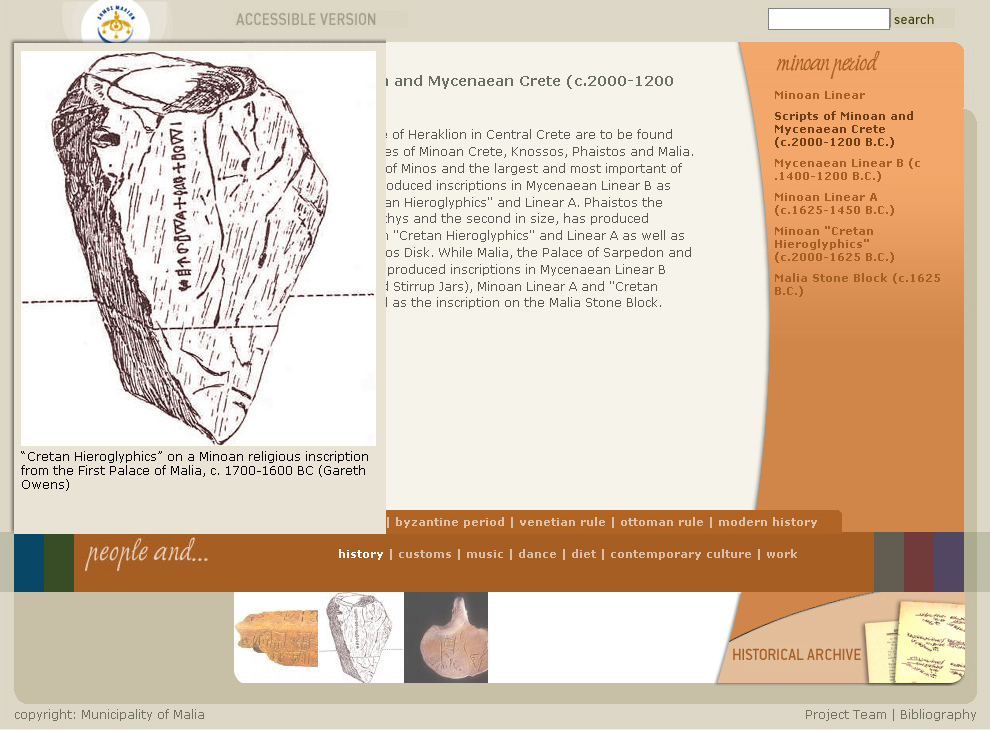 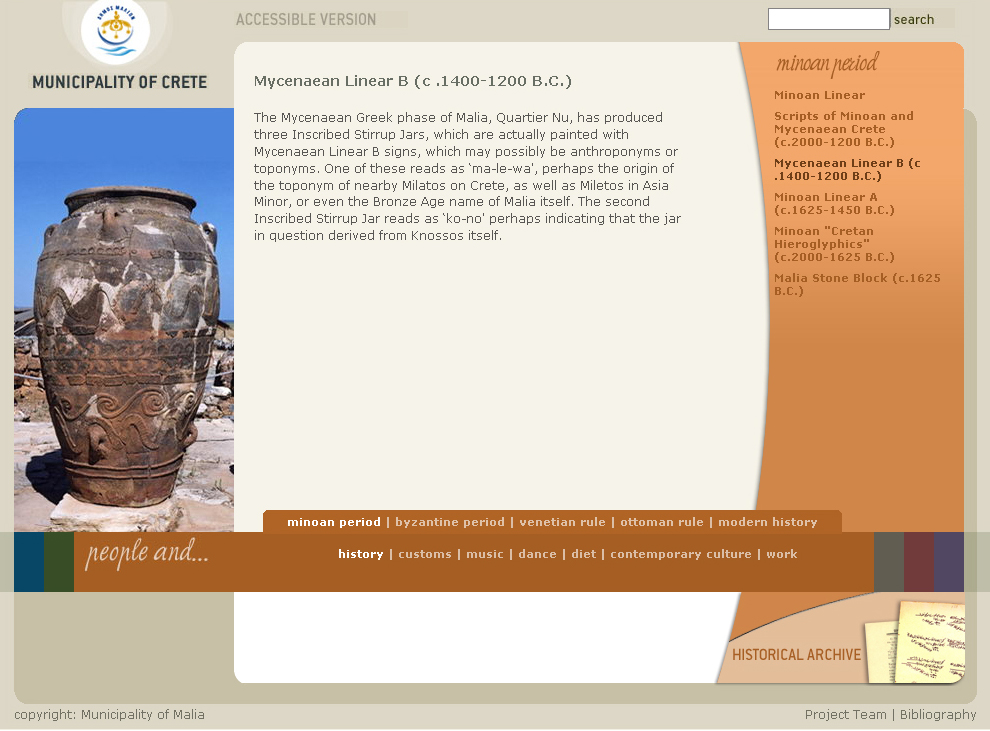 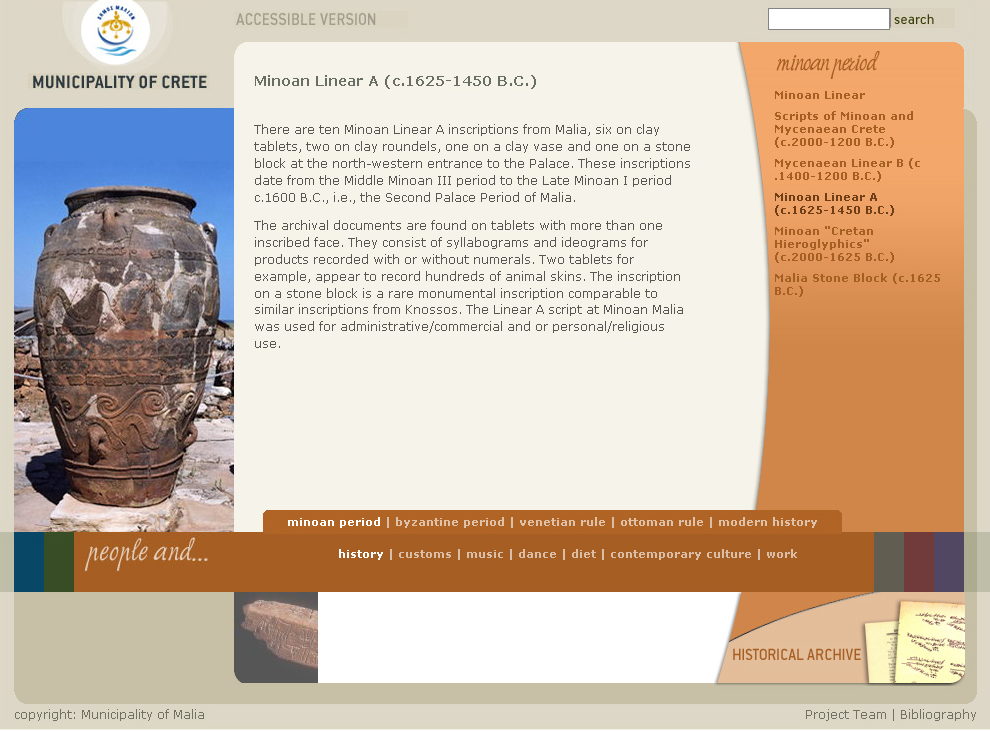 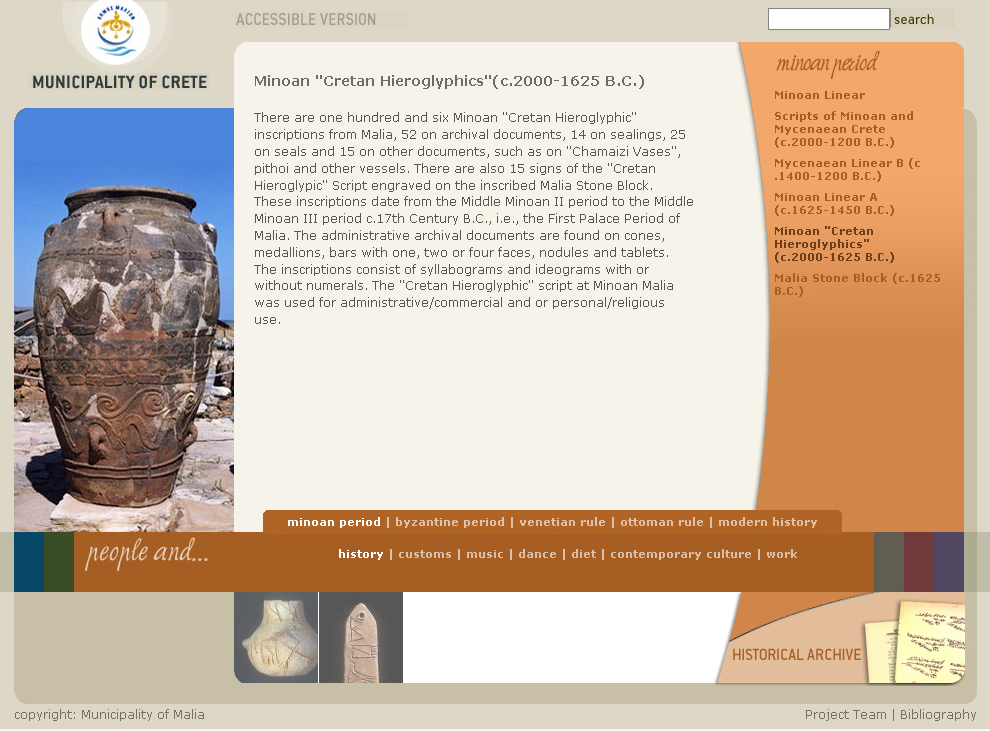 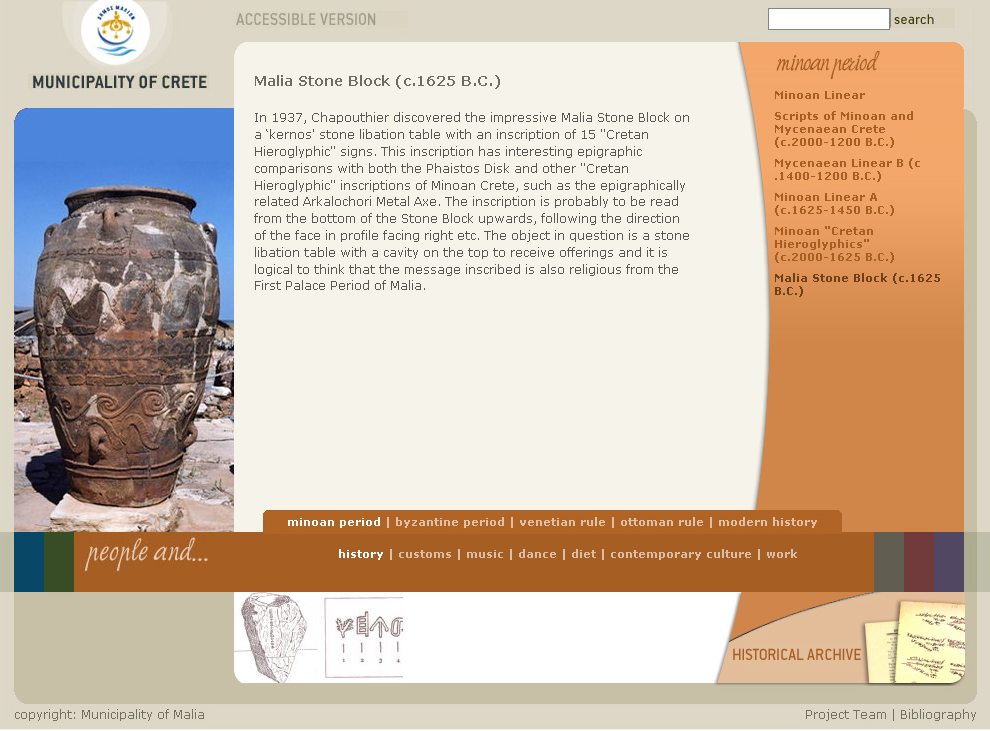 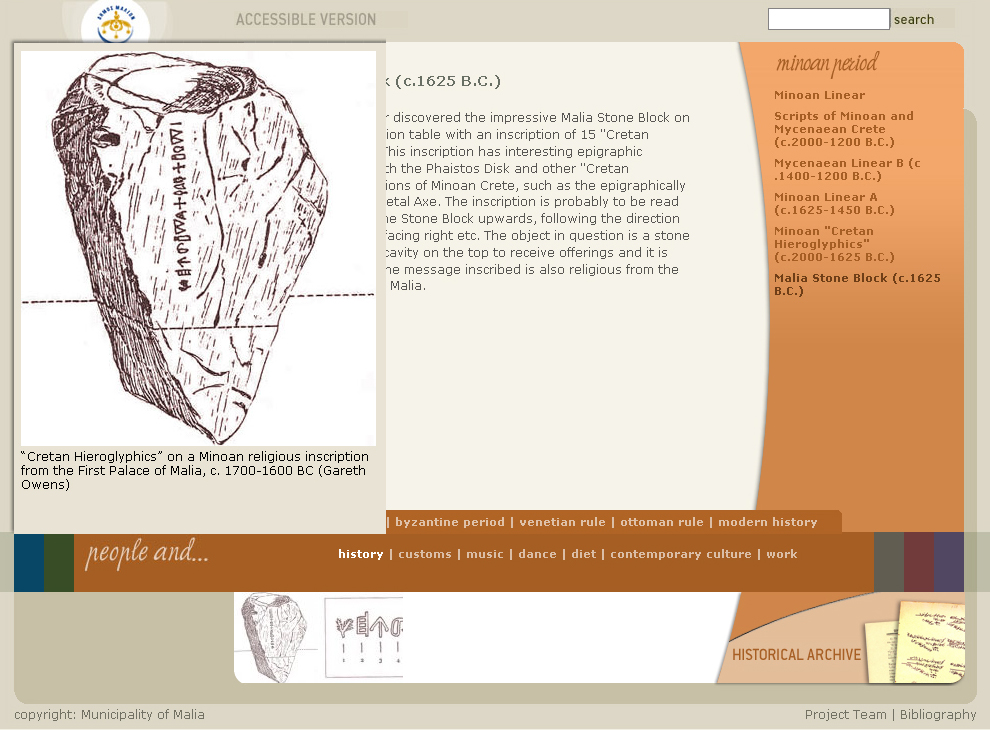 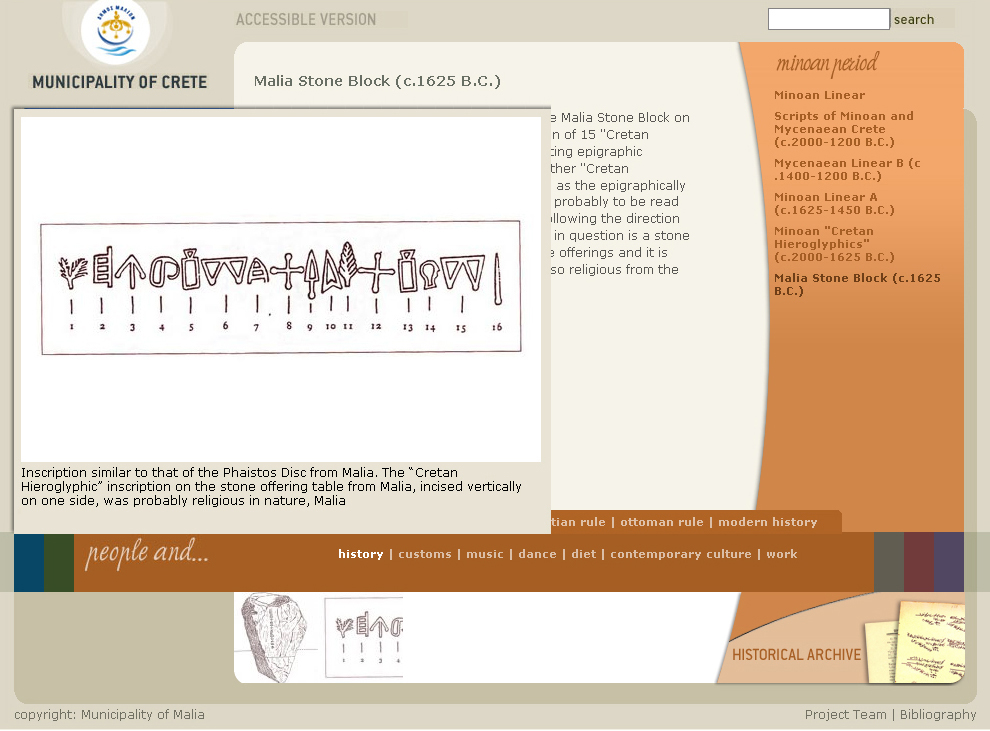