The excavation of Knossos by Arthur Evans, and a century of subsequent research on Minoan Crete, has uncovered c.2,000 Minoan inscriptions. An epigraphic study, transferring the sound values from Mycenaean Linear B to Minoan Linear A as a working hypothesis, has made it possible to “read” the Minoan language. Subsequent linguistic study has now made it possible to begin to “understand” the Minoan language.

Indeed, a systematic approach has made it possible to identify the Minoan language as a separate distinct branch of the Indo-European family of languages from the first half of the second millennium, with connections with Sanskrit, Armenian and Greek. There is clear evidence for gender, noun and verb endings, and items of vocabulary, all indicative of a language of an Indo-European nature. It is now possible to start writing the history of Minoan Crete (c.2,000-1400 B.C.). 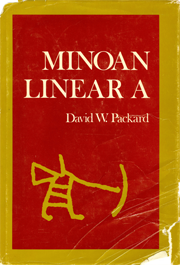