The decipherment of Linear B by Michael Ventris in 1952, demonstrated that the language recorded in the clay tablets was Mycenaean Greek, some 500-700 years before the Iliad and Odyssey of Homer. The inscriptions from Knossos, Pylos, Mycenae and Tiryns, Thebes and Khania, clearly demonstrate the nature of the Greek language as a well-defined distinct centum branch of the Indo-European family of languages.

Linear B records the Greek Language in the second half of the second millennium from the Mycenaean take-over of Knossos until the destruction of Pylos, shortly after the Trojan War. The works of Ventris, Chadwick, Hooker et alii have shown the phonology and morphology of Mycenaean Greek, and its unbroken development into Classical, Hellenistic, Byzantine and Modern Greek. It is possible, by interpreting Mycenaean inscriptions, to write the history of Mycenaean Greece (c.1400-1200 B.C.). 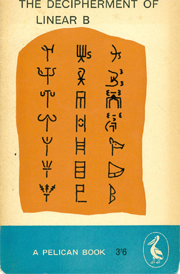